A Parking Garage is a Lot Like a Warehouse 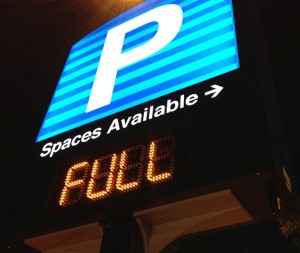 A small event on a recent afternoon in Boston got me thinking about storage capacity in the warehouse.

After a late lunch in the North end, I was back in the parking garage to fetch my car and head over to Logan Airport.  By the time I showed up to retrieve my car, a small placard stating “Garage Full” blocked the entry. I got into a line of three people looking to settle their bill and get their keys.

As I waited, mindlessly thumbing my phone, I heard a heavy engine pull into the garage and the slap of the “Garage Full” placard hitting the floor.  A tank-sized Lincoln SUV had hit the placard as the driver rolled down her window to ask, “Is the garage really full?”

An attendant answered with a mix of frustration and resignation that such public-handlers acquire over time, “yes, it’s full.”

The driver responded in a slightly snotty tone, “Really?  Even with these people leaving?”

“Yes,” the attendant answered, “the garage is full.”

This cramped parking garage’s entry was also its exit. Three of us stood waiting to get our keys and we would be leaving, but until the driver’s SUV backed up, there was no way to leave.  If the driver pulled forward into the garage, there was no way for any of us to drive out.  Even without the Lincoln around, pulling out of tiny parking spots into the narrow lanes without scratching or busting something took quite some time, not to mention the fact that the spot I had just vacated was not going to fit that beast of an SUV.

Give us a call if you would like to get a better understanding of your optimal capacity utilization so that you know when it’s time for you to act.