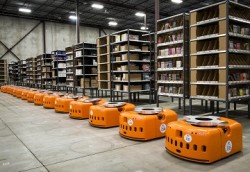 Geekwire reports (link to article) that Amazon plans to add 10,000 KIVA robots to its distribution centers by the end of the year.

If you don’t know KIVA robots, imagine cute little wheeled beetles that rush around a warehouse carrying shelving units on their backs.  They deliver shelving units to picking stations where pickers grab what they need from the proffered shelves.  Amazon bought KIVA about two years back for a whopping $775 million.

At the start of 2014, Amazon had 1,000 of these critters cluttering the corridors of their warehouses.  So a tenfold increase is a strong endorsement of its own enormous bet on this technology.  Interestingly, Geekwire asked Amazon whether the robots would affect employment levels in their DCs and Amazon folks assured everyone that no, employment levels will not be affected.

Should Amazon investors be happy that 10,000 robots are going to flood Amazon’s distribution and not a single employee will be affected?  An amazing $775 million investment that generates zero efficiencies?  A breakthrough technology so innovative it doesn’t move payroll one inch?  I’d say that’s not a good news day for Amazon investors.

To be fair, what Amazon could be saying is that growth is so enormous that the quantum leap in efficiencies that KIVA robots deliver will allow Amazon to keep employment levels steady while providing all the extra capacity that growing demand requires.  But they didn’t say that and if that is the case, Amazon made a mistake by not pressing it.